Uh oh! Making over a 2009 graph by Andy Kriebel this week. No pressure. The graph looks at the correlation between gold and oil prices with the premise that they’re closely related. You can see Andy’s own makeover here. Another of my favourites is one by Mike Cisneros, which you can read about here. I love the story telling element Mike achieves; something I was aiming for myself.

I started off looking at each price as a percentage of its average over the period (because an ounce of gold is much more expensive than a barrel of crude oil). This allowed me to produce an area chart showing which commodity was most “expensive” compared to it’s average price at each point during the period: 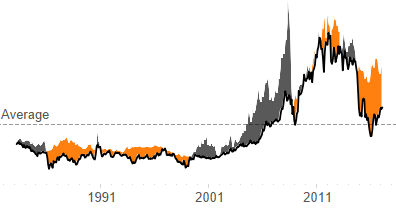 I didn’t love this as I couldn’t quite work out what I was trying to tell the viewer, so moved on!

Next up I considered scatter plots by decade with the aim of highlighting outlying points that weren’t fitting the correlation. My thinking was to display one scatter plot per decade – ideally in a tile like view. I probably should have pursued this idea as I think it would have allowed me to address a couple of concerns with the original chart. Instead I developed the idea of a tile per decade, focussing on four key fluctuations in the gold oil price ratio: 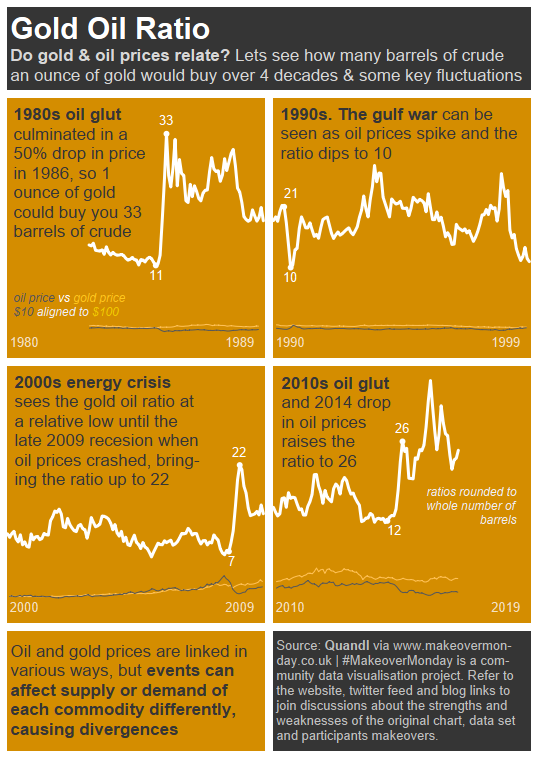 I really like the way I can make each tile focus in on a key fluctuation. The tile look was pretty straightforward to achieve. I created four separate charts – one for each decade – and set the background colour for each chart panel and axis. I appreciate that I’m not addressing every change in the ratio of gold to oil price, and perhaps haven’t even picked the most important ones, but it does allow a simple story to emerge for the reader. My story points focus on oil prices and were sourced from Wikipedia (1980s oil glut; 2000s energy crisis; 2010s oil glut). It would have been nice to add a parameter allowing the reader to chose what sort of story they wanted to read – one skewed to oil, gold or a mix. Unfortunately time didn’t allow.

In hindsight I think I may have added too much to each tile. The mini spark lines for prices added a bit of context for each story point, but had to be layered on as floating charts which was fiddly. They could also be misread to indicate that the gold and oil prices were quite close at certain points  because I haven’t synchronised the axis. I’ve tried to address that issue with a note, but in doing so I’ve added more to an already crowded first tile. Learning point: once I start adding I often end up adding more; better to take away! In my defence I did do some pruning. Initially there was a large number at the top right of each tile showing the closing ratio for each decade. I removed that number as it seemed better, and more space effective, to label the key line points I was referring to in the story points.

The story points are added as floating labels. The positioning of these varies depending on what screen resolution I’m using – you’ll see that the Tableau Public version doesn’t look quite the same. It would have been nice to make the viz more robust by using labelled points instead of the floating text.

All in all though a good opportunity to focus on story telling, and learn about oil and gold prices!