We’re redoing a list based on Dutch car registration data this week for #MakeoverMonday. The list doesn’t really do the data set justice, but I don’t speak Dutch so haven’t dug into the rest of the story! The actual figures were hard to reproduce and seemed like a niche part of the data, so I looked for a different story and decided to focus on the most popular makes of car. Headline figures give the reader some context as to how many registrations there were in 2015 and 2016, as well as the general growth rate. The slope chart then shows registrations for the top 5 makes and how these have changed: 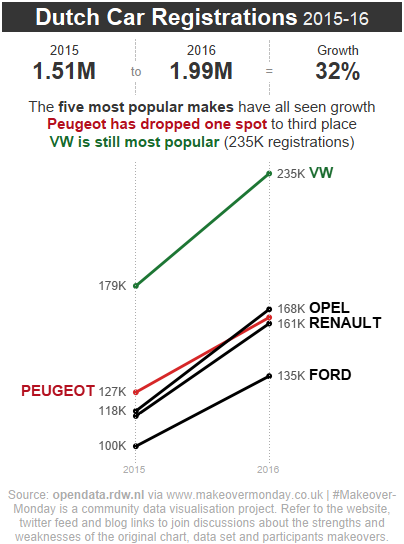 The visualisation is also available on Tableau Public.

It was great to try a slope chart this week. Also a quick shout out / credit to Charlie Hutcheson and Pooja Gandhi re the dashed lines in the top section of the viz – thanks for the write up on this technique.