Just a quick write up this week. Eva selected a map from Knoema showing what proportion of each country’s population had internet access. I quite like the interactive map, but it suffers from some problems common to filled maps. Eva and Andy have talked about the use of maps a few times in their weekly write ups so this week I thought I’d explore the issue in a bit more detail.

The original visualisation had a headline focussing on the top 5 countries for internet access. The top 5 in 2015 includes three relatively small countries making it a great angle to focus on for what I wanted to do. Rather than just write about the problems with a filled map I wanted to illustrate the issue. Here is the end result – hopefully it speaks for itself? 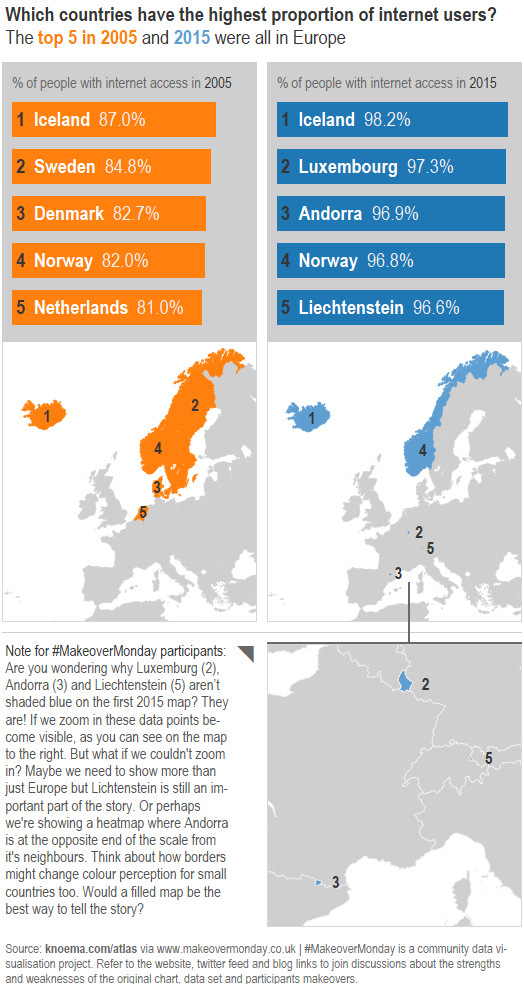 The interactive viz is also available on Tableau Public.

I’m not saying filled maps are bad. I’ve used then previously to good effect. I also like the extra context that the maps add to my makeover; the end result is arguably more engaging than the bar chart alone. In addition there have been some really nice map based makeovers this week that serve to highlight some key themes. But map-based visualisations aren’t without their problems, and there are aspects of this weeks data and story that illustrate some of those problems.