Week 27: Tourism in Berlin and Brandenburg

For week 27 a makeover of a filled map showing visitor stats for Berlin and Brandenburg. I’ve retained the filled maps but focussed on an angle that interested me; whilst Berlin ranks top for both number of visitors and total number of nights in all years, when you look at average nights per visitor it is one of the regional districts that usually tops the list. Check out the interactive version here on Tableau Public where you can look at different years, and explore how the figures differ for domestic or international tourists. 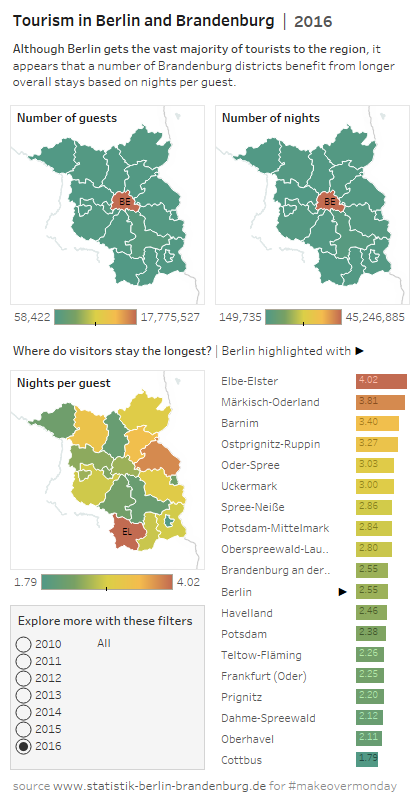 I was cycling in France around the time of the tour. Not quite at the same pace, even if we did pass a few signs! I can highly recommend a barge and bike holiday in Burgandy if you want to immerse yourself in the French countryside. Anyway here is a quick catch-up based on the week 28 data set; is the Tour de France getting easier, or the riders better? Available on Tableau Public here. 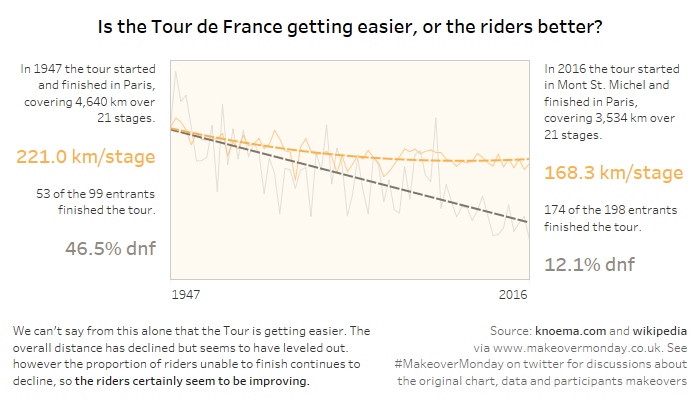 Is the Trump administration payroll top heavy? Well there is a bump, but actually I’m not so sure! Makeover below. Also available on Tableau Public here. 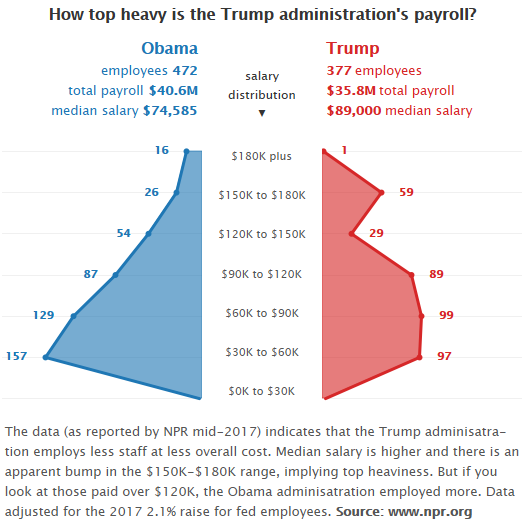 That’s a wrap! My final makeover for the year completed on the 29th December.

Statista put together a nice summary of how much water is used when producing various foods, using data from the Unesco Institute for Water Education. The statista version is a pretty clear bar chart which has been jazzed up into an infographic style. I recall that there were lots of great submissions from this week but didn’t remind myself of these before attempting my own makeover. Goal one was to show the breakdown by water type and goal two was to visualise the rankings - e.g. which food type uses most green water, which uses most grey.  A bump chart eluded me with the blended data set I used, but I quite like the alternative I came up with anyway! Next to the ranking there is a simple bar chart for each water type so we can see the absolute amount of water used (otherwise the ranking could be a little misleading). Both charts are ordered by total water consumption and text boxes added for title, overview and column headings.

I’m intrigued to see that pulses require the most grey water to dilute generated waste water sufficiently. A shame as I do like a good bean surprise for dinner ;o)

The makeover is also available on Tableau Public. 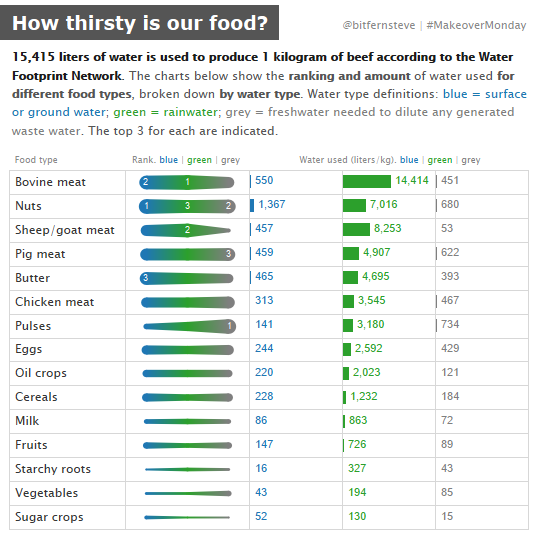