I spent more time looking into the data than on the visualisation for this weeks #MakeoverMonday because the data related to New Zealand. The task this week was to make over the international and domestic tourism spend charts on figure.nz. The international chart is shown below: 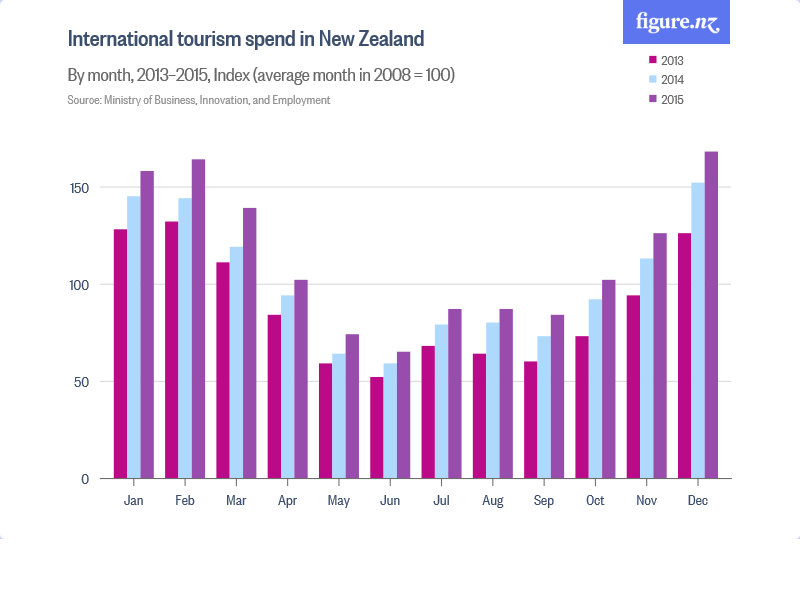 The charts are very clean, but showing each year side-by-side makes it hard to read for me. The key seasonality of tourism spend emerges nicely but also makes it harder to spot trends.

The charts use RTI (regional tourism indicator), but that is an old superseded measure. MBIE now use MRTE (monthly regional tourism estimates) which is a $ figure rather than an index.

You can read more about MRTE and RTI here on the MBIE website. One of the key differences I was interested in was that the RTI uses “a relatively coarse definition of domestic tourism … [which] conflicts with the official definition” – in essence some domestic tourist spend is discounted under the RTI.

Running short of time for my makeover I’ve focussed on showing the differences between the two measures:

A number of community submissions focussed on events such as the premier of the Hobbit movie, instead I’ve shown the marked temporary increase in tourist spend during the 2011 Rugby World Cup which jumped out from the seasonally smoothed 12-month moving averages.

The visualisation is also available on Tableau Public.