I don’t usually participate in Tableau #WorkoutWednesday, but this week the chart we had to reproduce featured my team so I had to give it a go!

Here is the finished chart, which is also available on Tableau Public: 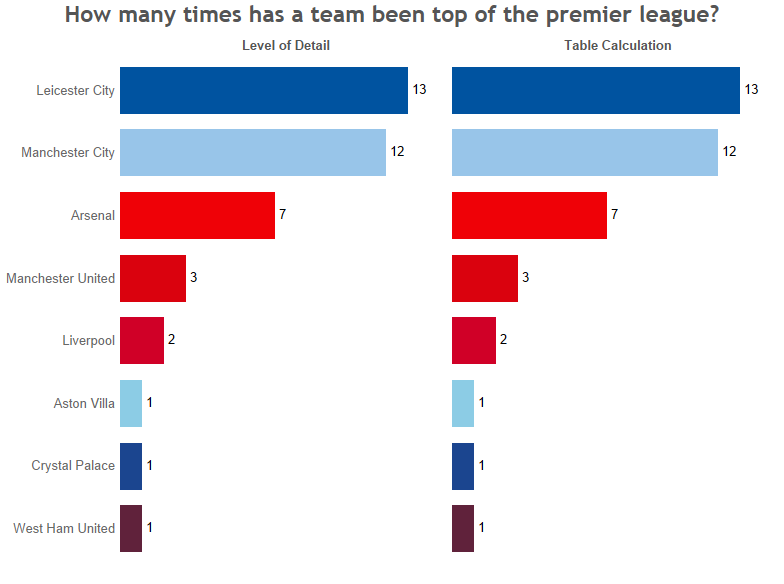 The source data included the match day (week), team name and their total points at the end of that match day. Here are the first two rows to give you an idea:

So the challenge is to:

The idea was to do that once using level of detail calculations and again using table calculations. Now to be honest both of these do my head in at times given where I’m at with learning Tableau so it’s a great challenge to try even if the mighty foxes weren’t featured!

Lets start with the table calculations because they are sometimes perceived to be harder.

After taking this approach (one calculation along team, the next along match day, and then filtering to final match day) I saw that other people had stopped at a version of the first table calculation. They could then plot a series of stacked bars (of value 1) for each week where a team was top. Cunning! And it saves getting your head around the double table calculation right? But on the downside you’ve got stacked bars where you didn’t really need them, and you need to use a reference line for an overall label. On the upside your head didn’t explode due to table calculations on top of table calculations. And the next poor analyst who has to maintain your workbook doesn’t curse you to all of your colleagues!

So what about the level of detail version? Well it’s basically doing the same thing, but in a different way of course. I haven’t broken this down into multiple calculations so bear with me. Starting in the middle with the first calculation {FIXED [Match Day]: MAX([Points Total])} I’m saying “tell me what the maximum total points were, regardless of team given that my viz is at the team level of detail, on any match day”* by fixing at the match day level of detail. We can then identify the teams with a points total that matches this max. These are the teams at the top of the table for that match day. We given them a 1 and others a 0. We can then SUM the 1s and 0s up at the Team Name level of detail (i.e. across all match days) to give us a final count:

*I wonder if I should have used EXCLUDE instead of FIXED in the level of detail calculations, but the above worked so I stuck with it.

Another little trick in the workout was to get the axis labels to appear at the top rather than the bottom (in Tableau continuous measures get a bottom axis whereas discrete measures get a category header at the top). The trick here, which I had to Google (leading me back to Andy’s blog of course!) was to duplicate the measures and drag them on to the top of the panel. I then had to clear the axis label and marks at the bottom (you can’t just unclick “show header” as you lose the top labels too).

All in all a fun challenge and some great Tableau calculation practice.